According to legend, Robert the Bruce went hunting in the great wood of Caledon, When he was charged by a fierce white bull.

"Then a man of great spirit, leapt before the King and grappling with the bull, brought it to the earth and held it there until it was slain by the remaining hunters. The man who rescued the King was called thereafter TURN-E-BULL and awarded with rich lands by the King."

The man of spirit was William of Rule who was widely known for his athletic sporting prowess. The fullest account of that forest chase was first written by Hector Boece, an early Scottish historian, in his "History of Scotland" published in 1526. The story was based on word of mouth and the ballads of wandering minstrels.

Traditions are frequently coloured in the passage of time, however in this case there is documented proof that some of the estates of Phillipshaugh, in Selkirkshire were bestowed by King Robert to a William Turnebull on Aug. 15th. 1315. Interesting to note that before this date the name of Turnebull had never been recorded.

But who was this William of Rule? There is no doubt that the surname came from Rule Water, a tributary of the river Teviot, in Roxburghshire, touching the parishes of Kirkton, Cavers and Bedrule and midway between Hawick and Jedburgh. 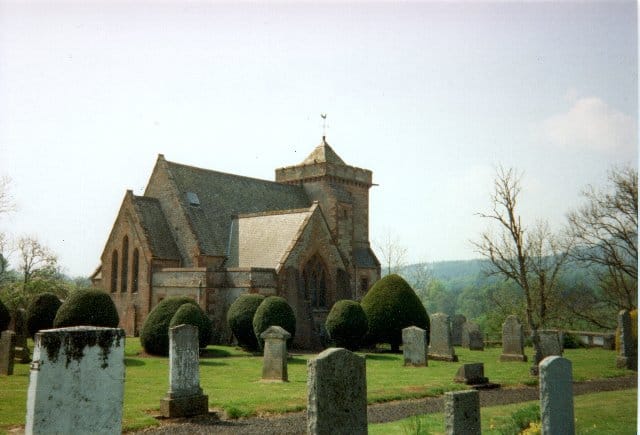 After 1315 mention of the Rules in the district dwindled as the new surname of Turnbull was substituted.

William Turnebulls bravado was probably his undoing when he came to a gruesome end at the battle of Halidon Hill in 1333.

Chroniclers tell of how he challenged any of the English army in combat. The challenge was taken up by Sir Robert Benhale, an English knight, in full armour, while William armed with his mastiff and broadsword. William quickly lost his dog, arm and head in that order and the Scots were routed including the loss of there leader Douglas.

The oldest and largest stronghold in rule valley was undoubtedly Bedrule castle, which came in to the hands of Sir James Douglas, who soon installed a Turnbull as its occupant, where they remained for several generations. Bedrule castle was destroyed by the English in 1545, but the Turnbulls remained in heritable possession until the end of the 18th century.

A survey by the Royal Commission of Ancient Monuments, established that the castle was oval shaped, measuring 66 x 43 yards with 5 circular towers, one of which formed the gateway.

The other major Turnbull castle was at Barnshill, near the base of Minto crags and built in the sixteenth century, they also owned Fulton Tower which is on the right of the Rule water and had estates on the river Teviot until these passed through various owners to the Elliot.

But what of the rich lands of Phillpshaugh ? These lands in Ettrick forest remained in Turnbull hands for at least 300 years until they gradually fell into the hands of their neighbors the Murray.

One of the more famous, or infamous of the Turnbull was lord of Minto. This was John, nicknamed "out with the sword" because of his fiery temperament. He was taken prisoner in 1399, and imprisoned in the tower of London until 1413. He was later killed supporting the French in 1424 at the battle of Cravat.

Several of the clan gained French honors and settled in Champagne and Normandy, where the name of Turnbull is recorded with their coat of arms as three bull's heads.