Professionally I'm a SAP HR/Payroll expert with some Workday integration experience. This generally means I sit at a desk all day, trying hard not to look out of the window or think too hard about my next adventure (HaHa! I'm only kidding boss if you happen to read this...).

I am happily married and very proud of my two grown up kids. My son (who likes cars) has just changed jobs, having just left his job for Mercedes AMG High Performance Powertrains - the people behind Lewis Hamilton and Valtteri Bottas. Having gained a 1st in Engineering whilst working for Mercedes, he has now joined Jaguar Landrover, in a new exciting engineering role. If Mercedes no longer dominate F1 in the forthcoming seasons, you now know the reason why. My daughter recently completed her MPhil at Cambridge Uni, studying something serious and somehow managed to get a job during lockdown. She is now working for one of the Cambridge colleges.

Outside of the office, as well as being a super hero (of course), I'm a Sea Kayak Leader and probably no longer working towards the Advanced Sea Kayak leadership award - who knows, I don't really see the point and just want to enjoy what I do. Apart from Sea Kayaking, I love photography, technology and other interesting techno/electronic stuff. I also try to play both Classical and Electric Guitar (note: not at the same time), but I am totally rubbish at both! But I enjoy it even if no one else does!
Here is a link to my photography page. 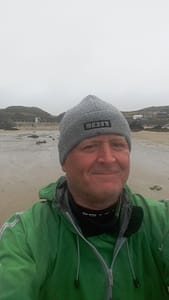 When not at sea (most of the time 🙁 ), I live near Nottingham, which is obviously nowhere near the sea! The sea being about three hours away in any direction. Obviously, this excludes the sea below Bridlington on the east coast, especially Cleethorpes/Skegness and further south, as this part of the British coast line isn't exactly the most inspiring coastline to kayak along. And besides which, the Skegness tattoo police will not let me enter the town, as I am "tatt" free and proud!

Living more or less in the middle of the country does have its benefits, as it means I can get to any coast to paddle (but not Cleethorpes/Skegness) and I am not restricted to one particular area. I guess this why Nottingham is also home to two top sea kayak manufacturers: Valley and P&H. The downside to living near Nottingham, is the three hour plus drive home on a Sunday night, getting home late and sorting kit out, then being fresh was a daisy for work on Monday morning!

Nottingham does however have a White Water course, at the oddly named National Watersports Centre. Most people, including many Nottingham folk are surprised to find Nottingham is Englands national centre for water-sports. Unsurprisingly, the facilities are generally under used. The White Water Course, aka "the concrete ditch" is where I use to regularly paddle in my playboat. One of the downsides to paddling the "Concrete Ditch" is that it is an off shoot from the River Trent and consequently the water quality is not always the best. Trent Belly is not uncommon for newbies paddling the Trent. I picked up  Leptospirosis/Wiels disease in 2014 from paddling the course and then sepsis in 2018. Although the jury is out on how I managed to end up with Sepsis. One theory, told to me by a consultant, is perhaps by paddling in the dirty water (and lets face it when you play boat your are in it more often than not) may have suppressed my immune system. Consequently, I gave up play boating in the Trent for health reasons. Amazingly my sickness record at work improved dramatically after this, despite recovering from Post Sepsis Syndrome in 2019/2020. If and when I ever do play boat in rivers now, it has to be "cleaner" rivers/sea.

I actually started kayaking when I was about 11 years old at the Riverside Centre in Oxford. The Riverside Centre being not far from where I grew up. At 15, I went to Scotland with my family for a holiday and took a bad swim at Grandtully, kayaking on the River Tay. It was a bit of a green room experience, being sucked under by a stopper, only to bob back up and get sucked down again. I didn't kayak again after this until I was in my early forties.

What made me start kayaking again after all those years, was as a result of a scuba diving accident I had suffered in the Caribbean. I ruptured the round window of my middle ear, during a dive on a sunken cruise ship (The Bianca C) and was now totally deaf in my left ear. Having returned to the UK soon after the accident, the surgery to repair my round window was too late to save my hearing in my left ear. I remember the consultant telling me if they had been able to operate within 5 days there was an 80% chance of me regaining my hearing. But between 5 and 14 days the odds went down to 20% and after 14 days pretty much nil. I was operated on day 10. After about three months following surgery, I did start to regain some hearing in my left ear, but to this day it is mostly bass! You would think I would have stopped scuba diving after this, but no, I loved scuba diving. It was only when my right ear popped on me one night, in much the same way my left ear had done in the Carribean, whilst returning to the surface, I actually thought I was totally deaf. It wasn't until I calmed down to hear the reassuring bubbles escaping from my regulator, I realised I could still hear! A few days later after dwelling on this little incident, I decided I couldn't take the risk of losing both ears. I decided to quit scuba diving for good. Not being able to dive and be in the water anymore, I needed to find another "wet" sport. Kayaking was the answer, besides which, I had the perfect facilities on my doorstep, the White Water course in Nottingham. 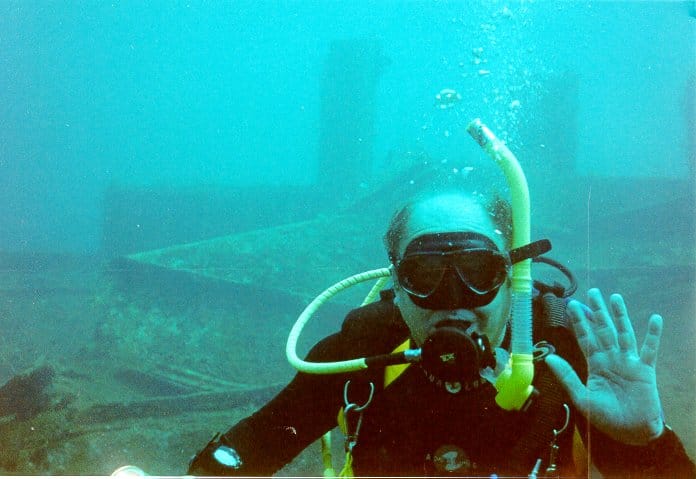 After stopping Scuba Diving, I did do a bit of long distance cycling. Having been a fan of the Tour de France, I was always curious as to how far I could ride a bike. In 2002 I found out and gained Super Randonneur award, a long distance cycling association award. A Super Randonneur award is for when you have completed rides of 200km, 300km, 400km and 600km all in the same season at Randonneur pace. Not only did I complete multiple rides of these distances in 2002, I also was always in the top six riders coming home. Mind you, I was cycling to work 20 miles a day and running 4 miles most lunchtimes, which did tend to help a bit.

I now have paddled many white water rivers here in the UK and abroad in both playboats and creek boats. But being restricted to limited weekend paddling (family/work obligations) was always problematic. It would always rain during the week and by the time you would actually get to a river on a weekend, the river would be empty again. And not to mention some of the access issues you'd encounter.

I competed in the 2004 Peak UK challenge series and managed to get 18th place overall - the best scores from three out of the four events held during the year. This series consisted of an Extreme Slalom, Down River Race and Freestyle, all using only one boat. I competed these PeakUK events using my playboat. The four events were held at the River Washburn, Holme Pierrepont, The Nene White Water course and The River Tryweryn. Great fun.

It was the Wet West Paddle Fest's river Morriston which got me into sea kayaking! Every year we would head up to Scotland for the fest, which generally always finishes with a kayak down a hard river, the River Morriston on the last day. The River Morriston is not an easy river to paddle down. When you are paddling well, it would be fantastic and you'd come away grinning from ear to ear. When paddling not quite so well and perhaps making very small mistakes here and there, the Morriston would punish you well and truly.

In 2011, having on previous trips to the Morriston, dented a new boat, dislocated a finger and lost a paddle, I started to feel a little trepidation (or let's say impending doom) long before driving up to the river. In fact, the fear of impending doom started in early 2011! Way, way too early! So much so, the night before we were due to paddle the river Morriston, I bottled out and booked a days sea kayaking instead with Sea Freedom Kayaking in Oban. By the end of the days sea kayaking, it didn't matter all the stick I got from my mates for not paddling the river, I was well and truly hooked on Sea Kayaking. What a great day I had too! Within five minutes of setting off, I'd seen two otters, a first for me; we were then followed around by a large male seal, who was obviously very interested in what we were doing; and on the return leg,  downwind and with the swell, we surfed the waves. It was a super day out and better still I was still alive at the end of the day!

2014 saw me winning the Oban Sea Kayak Race in the senior touring class with a time of 2:32:12. Not my fastest around Kerrera (I've manage a 2:18 twice! ) but considering the conditions on the day not too bad. It was probably the conditions, with it being a tad rough that played to my advantage, coming from a white water background. It was only when things started getting bouncy that I started passing people. Up until then I was the one being passed! My posts for the race for the following years can be found here : 2013, 2014, 2015 and 2016.

In 2018 I circumnavigated Anglesey in a day on neap tides, albeit with a kip overnight on Llanddwyn Island. My actual paddling time was 15:43 which wasn't too bad for a first attempt especially on neap tides. I now need to do this again on springs and complete the circumnavigation without an overnight stop.

If you fancy meeting up for a paddle, then please let me know.