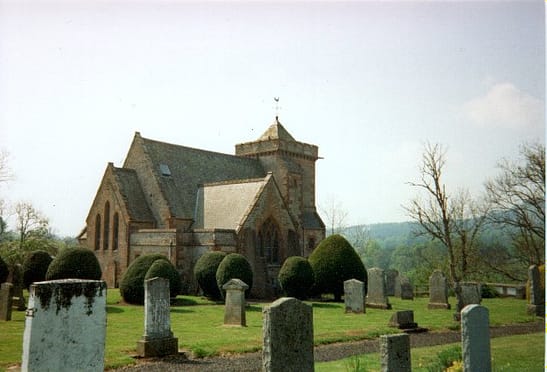 In digging graves here (Bedrule) within recent years large numbers of bones have been, from time to time, unearthed. These in some cases have been found to be exceptionally large. This has led to the assumption that possibly they were the remains of some of the chiefs of the Turnbulls clan who were known to be men of large and powerful build.

A story is told concerning the discovery of human bones in this churchyard . . . over a dozen years ago. It has the advantage of being true, as the writer can vouch for its accuracy.

Two young worthies from the neighbouring village of Denholm appeared at the church one Sabbath morning. It so happened there was an internment that day, and in digging the grave the sexton had come upon two very large thigh bones... the two worthies had no difficulty in identifying the osseous relics as being those of the veritable and original Turnbull, the hero who saved the life of King Robert the Bruce. It was a Sunday; nevertheless they appropriated the prize, and to avoid suspicion and prevent exposure, they each stored one of the huge bones down his trouser leg, and with perfect composure and serenity marched home in company with their unsuspecting fellow churchgoers. It need hardly be added that the uncouth relics were refused house-room, and had to submit to an unceremonious burial, one in a "yaird" on the east, and the other on the west side of the village, where they still remain...  so Denholm, unawares, may thus hold the remains of a great Scottish hero!